The western blot (sometimes called the protein immunoblot) is a widely accepted analytical technique used to detect specific proteins in a given sample of tissue homogenate or extract. It uses gel electrophoresis to separate native proteins by 3-D structure or denatured proteins by the length of the polypeptide. The proteins are then transferred to a membrane (typically nitrocellulose or PVDF), where they are stained with antibodies specific to the target protein.

HIV AIDS has become a global problem and the incidence of this dreaded disease has increased alarmingly in the last few decades. There are many techniques for detecting the presence of the virus in the human body and two popular methods are ELISA and Western Blotting. There are many similarities in these two types of testing. However, there are also many differences.

It stands for enzyme linked immunosorbent assay, and was the first test designed primarily for HIV detection. ELISA is known for its high sensitivity. In this test, a patient’s serum is diluted greatly (400 times) and placed on a plate on which HIV antigens are already present. If the serum contains antibodies for HIV, they stick to these antigens. The plate is then washed to remove all other components of patient’s serum and another specially prepared antibody is applied to the plate. This antibody binds to human antibodies and is linked to an enzyme. A substrate for enzyme is applied and the colour change because of catalysis of enzyme gives out the results of the test. This test gives a qualitative result. 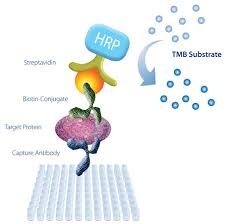 Both ELISA and Western Blotting are indirect tests as they measure the immune system’s response to an infectious agent rather than looking for the components of the agent itself. Since ELISA detects HIV antibodies which the body starts to produce between 2-12 weeks after becoming infected with HIV, experts say that one should wait for at least 3 months after unprotected test to confirm for HIV AIDS. Western Blotting is the most common method of testing to confirm positive results from ELISA test. Western Blotting is used more as a confirmatory test as it is difficult to perform and requires a high skill level. One advantage of Western Blotting is that it’s less likely to give false positive results as it can effectively distinguish between HIV antibodies and other antibodies.
ELISA assays use absorbance detection for protein, and nucleic acid quantification. Camlab have a have a range of Precisa microplate readers and plates ideal for ELISA and other biological, chemical, or physical reactions.
Click Microplate Readers to view online or request more information by filling in the form below:

3 thoughts on “What is the difference between Western Blot and ELISA?”