The Western blot is an analytical technique used to detect specific proteins which have been separated by gel electrophoresis according to size. The separation technique relies on an electrical current being transferred through a buffer solution enclosed in an electrophoresis chamber by a connected electrode (see Figure 1). The proteins are then transferred via the wet-transfer method from the gel to a membrane which is usually made from nitrocellulose or PVDF (see Figure 2). The membrane is then probed with specific antibodies which target the protein marker. Since biological reagents are colourless, these antibodies are radioactively labelled with fluorescent proteins which tend to be green or red. This labelling allows us to see the size of the band (kDa) using luminescent imaging of the membrane, where band density can be measured (see Figure 3).

Fig 1: shows the set up of an electrophoresis chamber 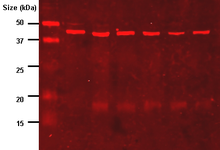 Fig 3: shows the image produced by Western blotting, with banding of the sample protein.

ELISA stands for enzyme linked immunosorbent assay and has many different applications such as quality control in industry, and as a diagnostic tool in pathology and medicine. Antigens from a test sample are greatly diluted and attached to a surface. This surface tends to be a multiwell plate in which a pre-determined layout of sample is organised.  A specific antibody is added which binds to the sample antigen. The antibody used in this step is linked to an enzyme, so that in the final stage the enzyme’s substrate can be added. The compilation of these reactions produces a detectable signal such as a colour change, resulting from the binding of the substrate to its complimentary enzyme to form an enzyme-substrate complex (see Figure 4). Samples which can be tested include viral particles, food antigens or proteins.  The multi-well plate is then read by a plate reader to give a qualitative, quantitative or semi-quantitative result and this information can be used accordingly.

Both ELISA and Western Blotting are indirect tests for use in analyzing a wide variety of samples. ELISA is a simpler and faster procedure than Western blotting, which is less specific.  Western Blotting is a highly successful testing method for confirming positive results from ELISA tests. It is also used as a confirmatory test as it is difficult to perform and requires a high skill level. One advantage of Western Blotting is that it’s less likely to give false positive results as it can effectively distinguish between different antibodies.
ELISA assays use absorbance detection for protein, and nucleic acid quantification. Camlab have a have a range of  microtitre plates ideal for ELISA and other biological, chemical, or physical reactions. See also our range of electrophoresis chambers and accessories for use in the Western blotting technique.
If you have any questions about any of our products, you can give one of our technical team a call on 01954 233 120, email support@camlab.co.uk or fill in the form below: