How to use the leveling screws on Bostwick Consistometer. Should the device be level, as the instructions say, or doesn’t it make more sense to set the device at an incline?

The truth is that, although it may seem logical to incline the device to measure the flow consistency of your product, the incline would throw off the accuracy of the results. Tip anything at an angle and it’s more likely to tumble down because you’re increasing the combined weight of the molecules on top, which adds considerably to the force of gravity that’s already bearing down upon them.

Consistency is supposed to measure how a material flows against itself, moved only by the force of gravity. Tip up the instrument, and you’re adding additional, unnecessary force. Sure, the product may spread out a bit faster, but is satisfying the need for speed worth it if all you get is a meaningless measurement? Adjust the feet screws until the bubble in the circular level is centered. 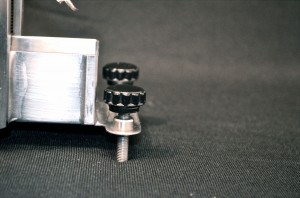 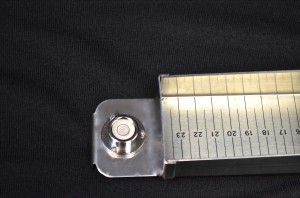 The Bostwick Consistometer is used all over the World to check the quality of sauces and condiments. Bostwick In-house training at perform blind product tests and clearly define the differences between brands of ketchup and mustard. This is a testament to the value placed on Bostwick Consistometer tests by the top food manufacturers.

But first I’ll go through the operation and conduct of a test. The simplicity of operation is shown in these illustrations.

The Consistometer is built around a trough approximately 14 inches long. There are marks one-half centimeter apart along the bottom of the trough. These marks are sometimes referred to as Bostwicks. About two inches from one end is a spring loaded gate. The gate can be closed and a notched lever holds it in that position until released by pushing down on the lever arm.

The closed gate forms a small reservoir behind it. 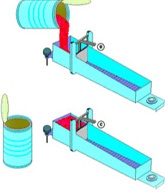 To run a test, first you close and lock the gate with the lever arm in the up position.

Now it’s time to pour in the sample. Fill the reservoir up to the top of the gate.

The next step is to release the product by pressing down on the lever arm . Allow the product to run through the trough for 30 sec.

Observe how far the product traveled down the trough in the 30 sec.

The trough has gradation marks indicating the distance in centimeters. Record this value as the consistency of the product.

Now that you see how simple the test procedure is, I’ll give a little theory about what the test really measures. Consistency is a measurement of how a material flows against itself because the force of gravity. Sort of like sagging. Therefore, when the gate is released the sample begins to sag and drifts down the trough. The distance it travels in fixed length of time is know as its consistency.

More information can be found here